According to recent media reports, a North Korean soldier who recently defected to South Korea was found to have antibodies to Anthrax in his system. These reports have heightened concerns that a North Korean Anthrax Attack could be possible.

If North Korea has indeed weaponized this deadly bacteria it is important to understand what anthrax is and the possible consequences of such an attack. The rest of this article will discuss the following:

Can Anthrax be Treated?

What would be the consequences of a Biological Anthrax Attack?

Does North Korea have the capability to carry out a Biological Attack?

How to prepare for a Bioterrorism Anthrax Attack

Anthrax is a bacterial disease which mainly affects herbivorous animals, such as:

However, all mammals including humans are susceptible to infection. When a person comes into contact with Anthrax usually through a cuts or scrapes it can affect the skin and, sometimes the respiratory or gastrointestinal tracts.

Anthrax is caused by the aerobic bacillus, Bacillus anthracis, and is spread by spores which are found in animal products such as wool, hair, hides, skins, bones and bone meal, and in the carcasses of infected animals. These spores can also contaminate soil so may survive for many years.

There are three main infection routes of Anthrax: 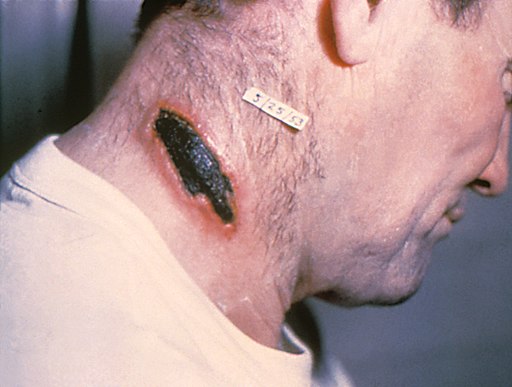 Cutaneous anthrax is the most common form of Anthrax infection that affects humans. A person becomes infected when anthrax bacteria enters the body through a cut or scrapes. Once infected lesions appear on the skin which develops into a characteristic ulcer with a black center. Lesions normally appear on the head, neck, forearms, and hands and affect the skin and tissue around the site of infection.

When anthrax spores come into contact with our skin, the incubation period is usually 48 hours but it could take up to seven days.

Inhalation anthrax occurs when a person breathes in anthrax spores. symptoms begin with a flu-like illness such a sore throat, mild fever, fatigue and muscle aches, which can up to a few hours or days. Shortness of breath, painful swallowing, nausea and coughing up blood are also symptoms of Inhalation Anthrax.

As the disease progresses, high fever, difficulty breathing, and shock can occur. There is also a possibility of contracting Meningitis which is a potentially life-threatening inflammation of the brain and spinal cord.

Inhaling Anthrax is the most deadly way to contract the disease, and even with treatment, it can often be fatal.

If left untreated, the infection can cause septicemia, toxemia or meningitis, and is fatal in around 5% of cases

Can Anthrax be treated?

The good news is that Anthrax can be treated effectively with antibiotics if identified in its early stages. Antibiotics such as Ciprofloxacin (Cipro), doxycycline (Monodox, Vibramycin, others) and levofloxacin (Levaquin) are used to treat the infection in both adults and children.

An Anthrax vaccine for humans does exist but wasn’t developed for general release to the public. It was developed and reserved for use by military personnel, scientists working with anthrax and people in other high-risk professions. The vaccine doesn’t contain live bacteria so can’t lead to infection, however, it can cause side effects, such as soreness at the injection site to more-serious allergic reactions.

Although only an assumption it is, therefore, a possibility that if a large-scale attack where to happen the military may sanction the release of the vaccine for use by the general population.

What would be the consequences of a Biological Anthrax Attack?

A large number of people could be infected by only a small amount of Anthrax and an attack could be carried out in a number of ways such as:

If anthrax spores are released into the air this would result in Inhalation anthrax. This is the most serious form and can kill quickly if not treated immediately. If an attack is not detected by government monitoring systems, it could go unnoticed until medical professionals start to see unusual patterns of illness among sick people showing up at emergency rooms.

Bioterrorism using any form of a biological or chemical agent is scary. Such an attack would cause increased fear and anxiety among the public. Especially among the uninformed and unprepared.

An Anthrax attack would also have a detrimental impact on economic, political and social areas of life. Causing financial pressure and strain on our medical services.

It would also impact on agriculture such as if areas of soil became infected creating a long-term health risk if spores were to remain undetected and dormant on agricultural land. Infected animals and the livestock would have to be destroyed therefore affecting the food chain.

Water supplies could become contaminated creating a water shortage if detected and if undetected widespread infection.

Does North Korea have the capability to carry out a Biological Attack?

Recent media reports have alleged that at least one out of the four North Korean soldiers who defected in 2017 were found to have Anthrax antibodies in their system.

If true this would indicate that the soldier or soldiers were either vaccinated against anthrax or exposed to it at some point. As Anthrax is an ideal biological bacterium agent there is a possibility that North Korea has either the intent or existing capability of using anthrax as a biological weapon,

A recent report called The Known and Unknown – North Korea’s Biological Weapons Program created by the Belfer Center for Science and International Affairs at the Harvard Kennedy School. States the following regarding the likelihood of North Korea’s capability to carry out a Biological Attack.

A series of photos of the Pyongyang Bio-technical Institute released by the North Korean state media in 2015 raised concerns for dual-use. Analysis of these images revealed that the Pyongyang Bio-technical Institute could produce military-sized batches of BWs, specifically anthrax. The modern equipment visible in these images also showed a
violation of the Australia Group’s dual-use items list, and showed that it is possible to convert the facility from pesticide to BW production.

North Korea’s National Defense Commission (NDC) issued a statement strongly refuting the claim however the report goes on to say that.

The most recent statement made by the South Korean Defense Ministry is that “North Korea has 13 types of BW agents which it can weaponize within ten days, and anthrax and smallpox are the likely agents it would deploy.

Reading the report via the link above will allow you to come to your own conclusions. Suffice to say its better to prepare for such an attack and not dismiss the possibility.

How to prepare for a Bioterrorism Anthrax Attack

A Bioterrorism Anthrax Attack is a form of biological attack that involves the use of harmful viruses, bacteria, fungi or other biological agents as a biological weapon. Such a weapon is intentionally released with the intent to cause death, illness, fear, and economic damage. We recently published an article on this site entitled Effects Of A Biological Attack And The Actions You Can Take which talks about the types of biological agents that could be used as a biological weapon and their effects. It also offers suggestions on the actions you can take if such an attack occurs. The article also has a link at the bottom to Biological Attack Fact sheet from Home Land Security.

North Korea soldier who defected had immunity to anthrax

How serious is the North Korean anthrax threat?